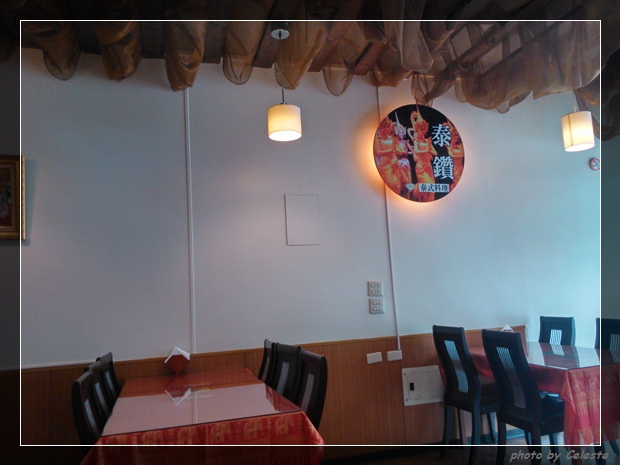 This Thai place was recommended by a friend of my parents. This friend of theirs had been to Thailand several times, so we thought highly his recommendation. 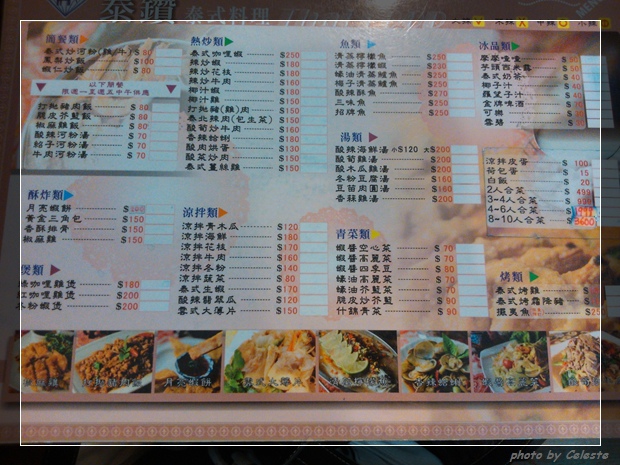 Looking at the menu, the price seemed a bit steep for Taichung, but it was still cheaper than the more posh places. There were several dishes that couldn't be found at other places. But Taiwanese people enjoy only a few certain types of dishes, so I doubt many are in for an adventure. 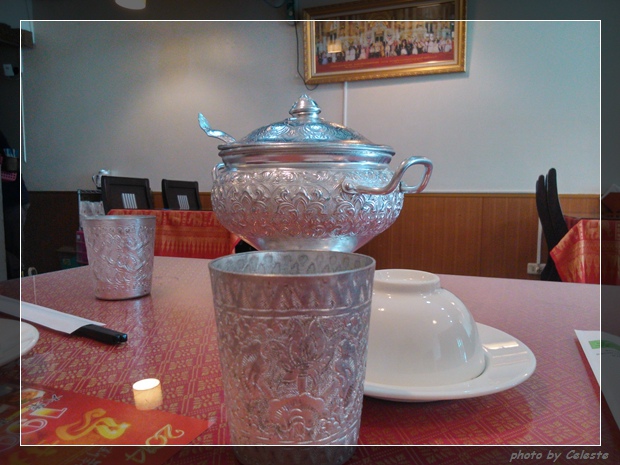 The interior, along with the cups and rice holder are very Thai style. You can tell from the bowl, plate, and chopsticks, that the majority of the customers are Taiwanese indeed. (Thai people usually eat with fork and spoon). 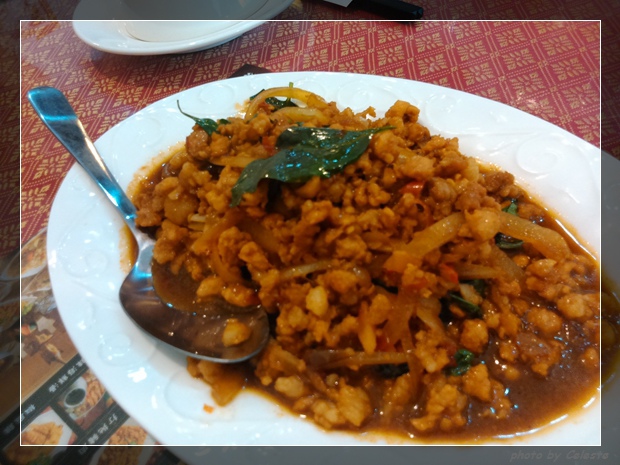 The first dish up was the khrapao (pork). We didn't think very highly of it, as it had onion in it. Also, there was a bit too much sauce. 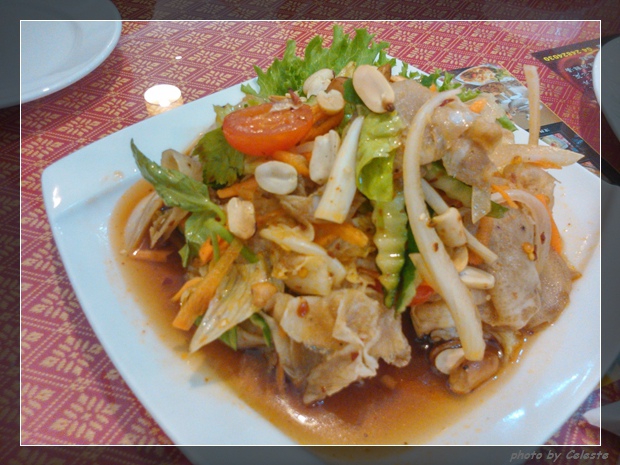 This dish is a famous Yunnan dish. It's basically a sour and spicy salad of very thinly sliced pork. Before I got into the habbit of eating pork, I often made exceptions just to get a taste of this! There is also a considerable amount of veggies in it. Since it's not difficult to make, I'd say it's quite a 'safe' dish to order, anywhere you go. 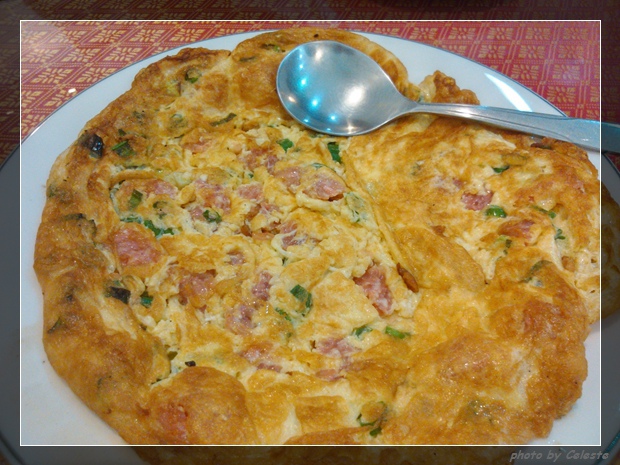 Now, the dish that really made the day was this fried egg with naam. Naam is a kind of sausage made from fermented raw pork.

I had never imagined that once I left Thailand, I could still taste naam! The last time I introduced this, the comments revealed that many were not willing to try this. I would suggest that if you are holding back because it's raw meat, then you could try this dish to get a sense of what it taste like. Whenever I order fried egg dishes, I'd eat the egg part first. But this time, I was very naughty! I ate all the naam! And afterwards, I even wished to buy some naam from them!

Actually, you can make naam at home. But it's difficult to control the humidity and temperature to ensure the process doesn't go wrong. Now, since Taiwan has such a humid climate, I don't dare to have a go at it. 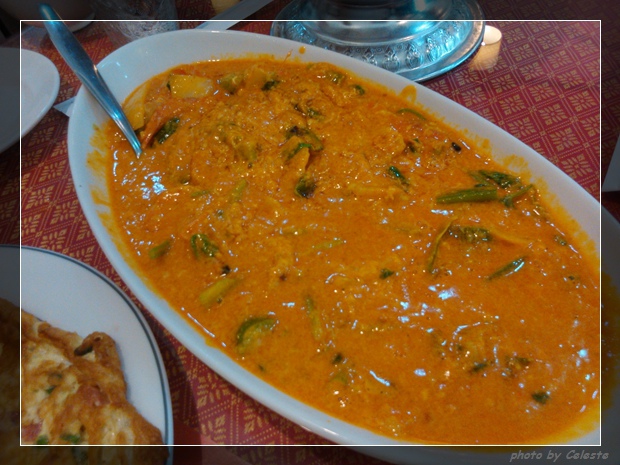 This probably doesn't look as tasty as it really is. It's curry shrimp. I didn't have very much of it, because I'm trying to avoid taking in too much shellfish. Plus, I've never been a big fan of curry. 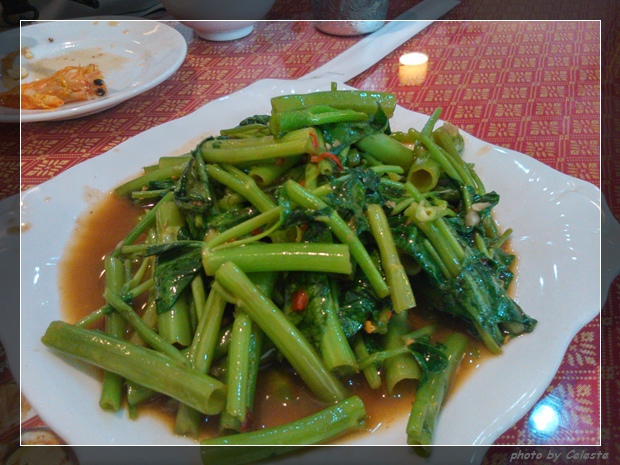 Veggie of the meal! 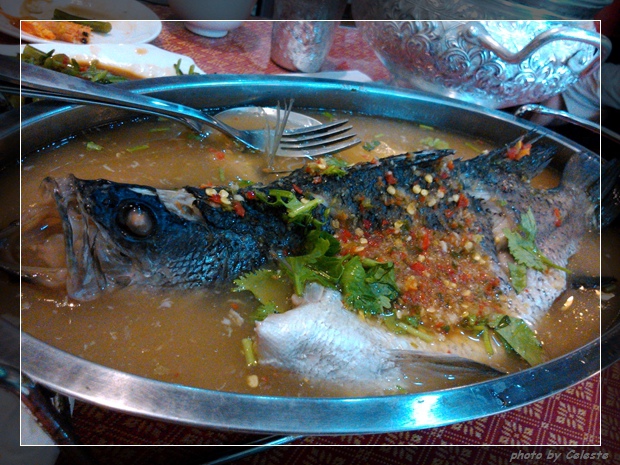 In terms of the scale of this restaurant, I'd say the fish was pretty good. The sour and spicy soup of the steamed fish also went well with rice. 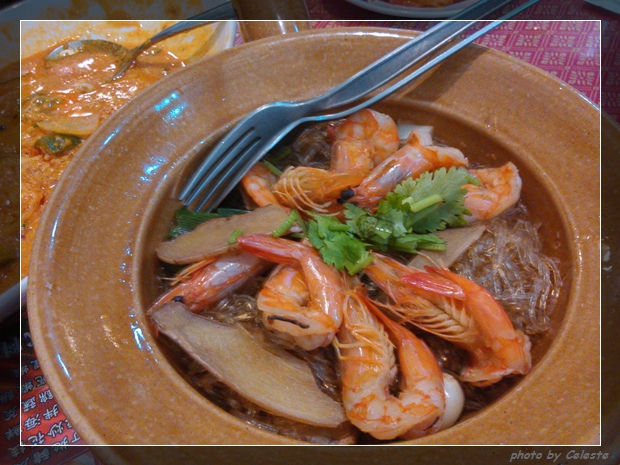 Shrimp potted with vermicelli. My dad wanted to try this dish. He really enjoyed this dish when we were in Thailand. But he was very disappointed when it was served. 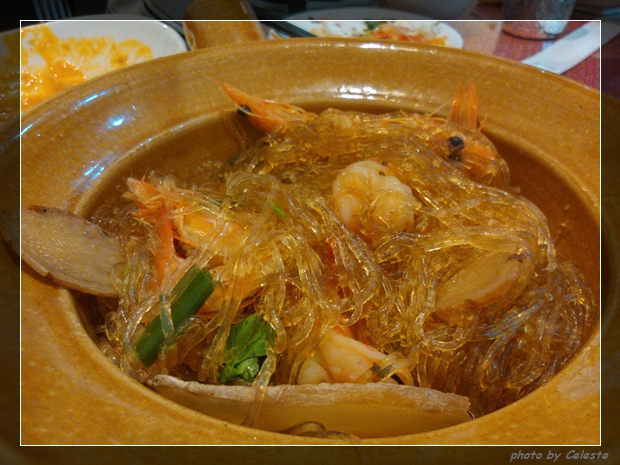 After we mixed it up again, it looked more like what my dad had expected. The ones we used to have in Thailand, had the shrimps at the bottom of the pot... Aside from the appearance, though, we didn't think it tasted anything like what we had anticipated.

It was a bit too much food for just the four of us, so the bill turned out to be a little expensive. But then, we took what we couldn't finish home - mostly the curry and made another meal from just that. So in the end, it was still within an acceptable range.