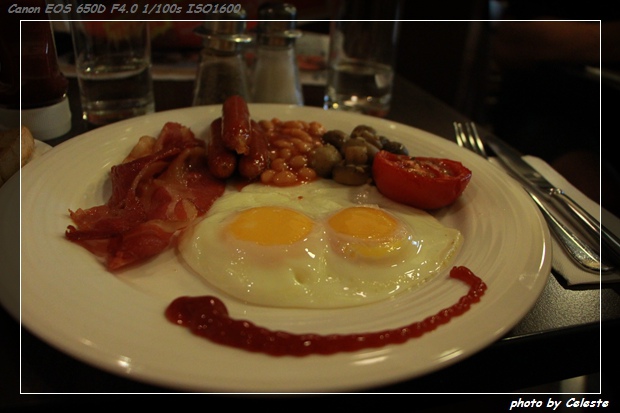 Some of you may understand how pregnant woman sometimes have special cravings for certain foods... Well! One afternoon, I was browsing through my old England articles, when I came across the following related articles on English breakfast!

Afterwards, I felt the urge to vent on Facebook. I really wanted to have some! So I popped the question to see if anyone knew where I could get really nice English breakfast. Although I had ［ON TAP］ in mind, I wanted to try my best to avoid it, as I know the owner is a supporter of Man United - the arch enemy of my team - Liverpool F.C. Then, a friend suggested Pot Pie Cafe. I'd heard of the place before, but it was not very convenient for me to get there. That's why I'd not been there all this time.

Considering that now I have this crave as motivation, I thought it was the best time to make a visit. After all, when that crave is gone, who knows, I might never have the chance to come! So my other half and I decided to give this Pot Pie Cafe a try. 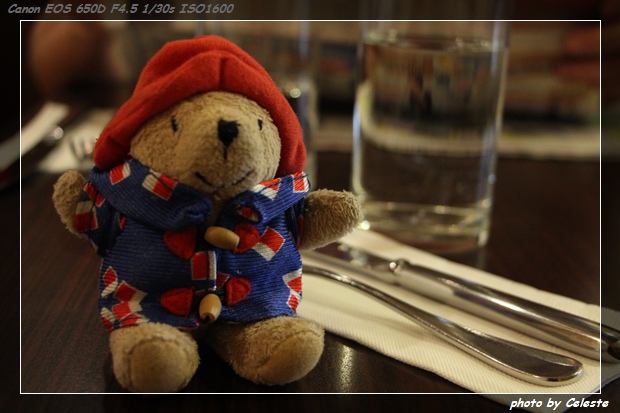 Being in the third trimester, unlike many other mothers, I sleep at quite early hours, and wake up early as well. But the other half was still in bed, so I had a few shortbreads, and waited until he woke up, and also waited until it reached the opening hour of the cafe. My plan was to have this as brunch, and skip lunch entirely. 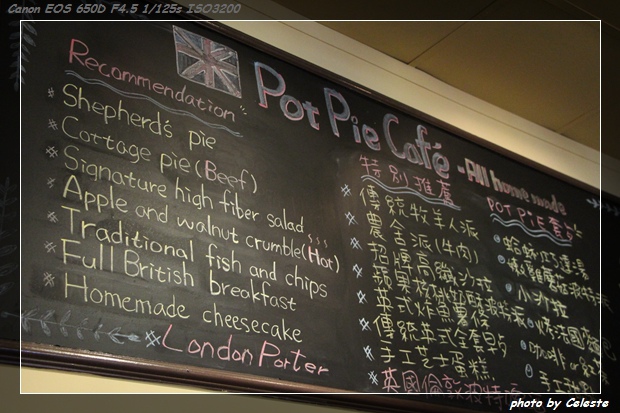 招牌餐點全都寫在黑板上。
All the signature dishes are written on the board.

Some of you expressed in your messages that you'd like to try fish and chips. Well, they serve that here. (Although I've never tried it... being my first visit here.)

Initially I was afraid we might not get a seat, because we came without making a reservation. But we were there quite early. After we sat down, the place became crowded. Of course, there weren't that many seats so it wasn't difficult to be full. There were only two people - one in the kitchen, and one serving. I thought, great! We'll probably have to wait forever to get our food. But it turned out we didn't wait that long at all! 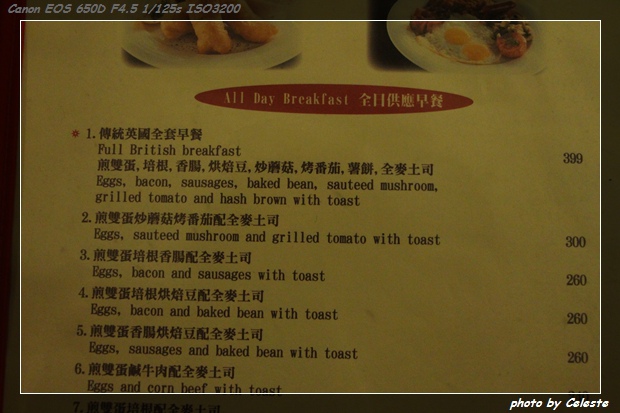 The point of this trip was English breakfast, so what else was I going to order? 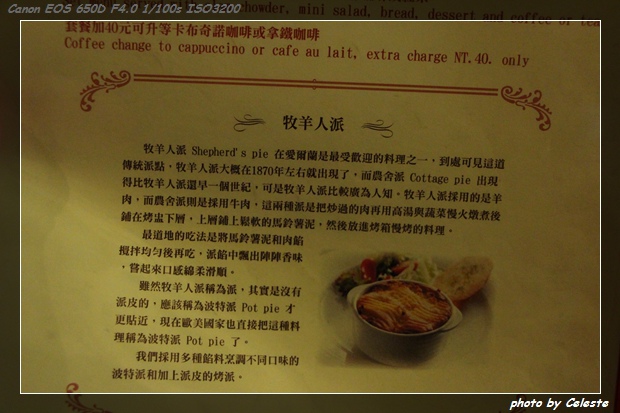 What about the other half? 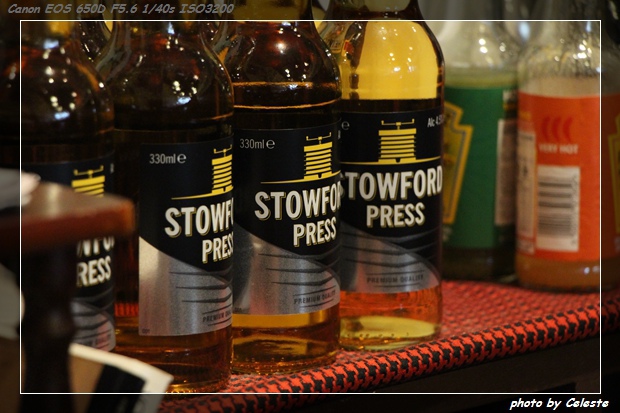 Although there were only two people in the shop, but the service was excellent! No one waited too long for their dish. And they didn't mess up any of the orders either. I reckon, that's probably why they could survive till now. 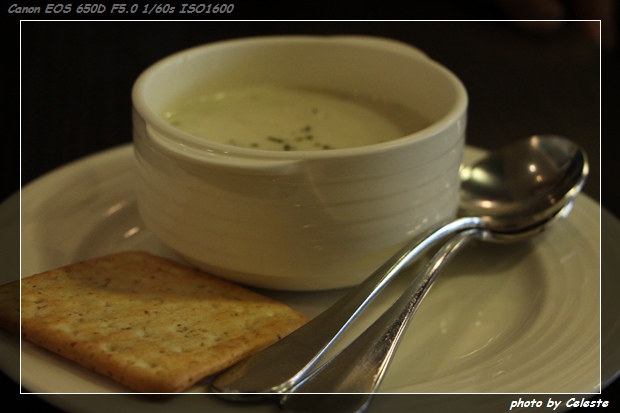 The chowder came with the pie combo. They gave us two spoons, so I got to taste a bit of the soup as well. 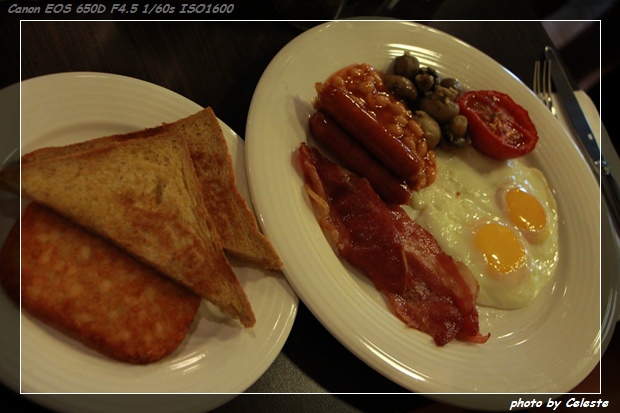 And voila! Here's my English breakfast! 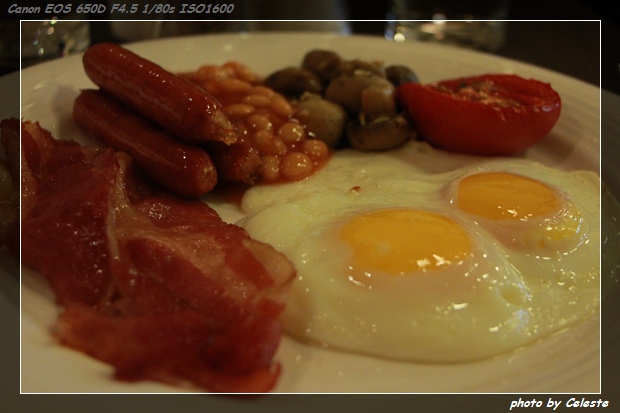 Now, if you know what an English breakfast should be like, you'll be able to see from the picture that they are, indeed, doing it right! 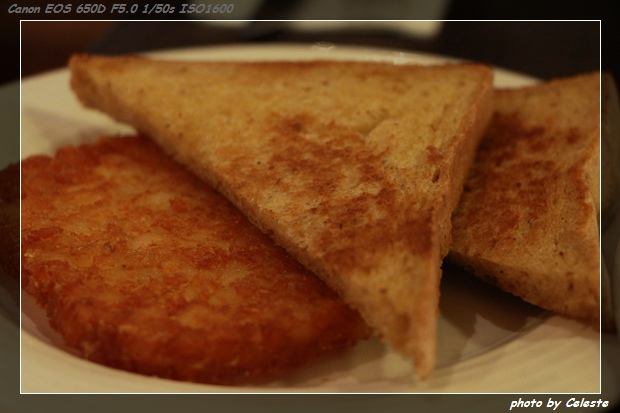 The only difference is that the hashbrown and the toast are placed on a different dish. I suppose that's because there's one extra egg. 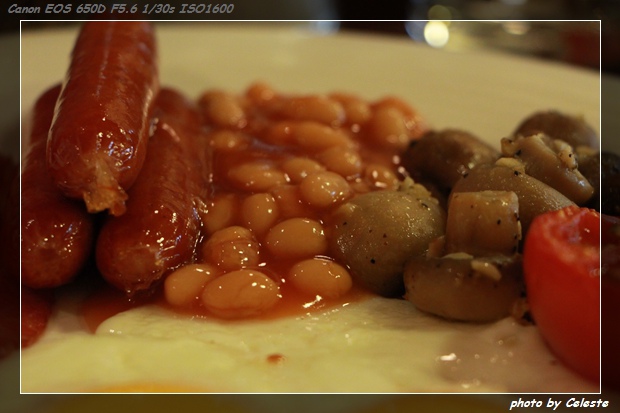 Most Taiwanese people do not fancy 'em baked beans, but I love 'em! 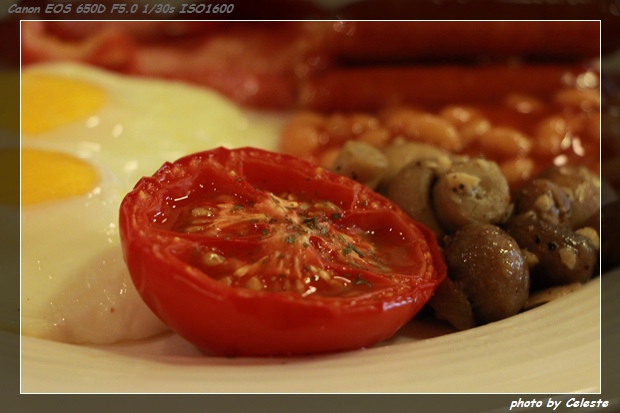 The baked tomato and the mushrooms tasted delicious as well. Wished I could ask for more mushrooms! 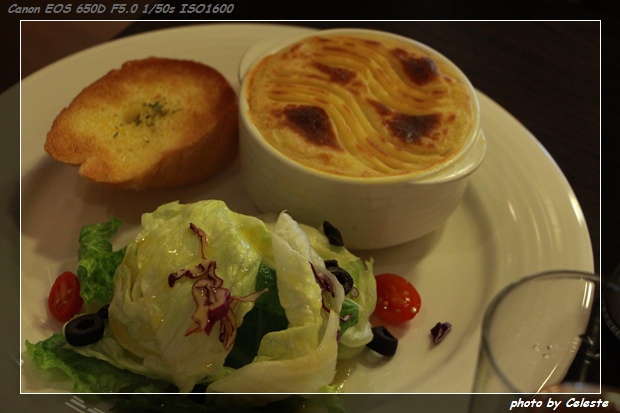 Next comes the shepherd's pie. Don't underestimate this dish. It looks small, but it's filled with lamb and mashed potato! Both of these will stuff you full in no time at all. 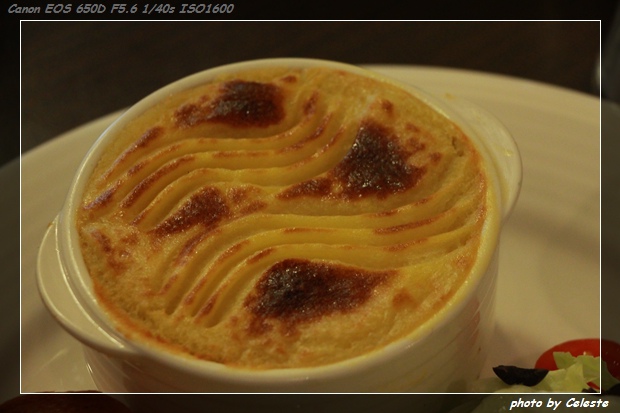 Look at that lovely pie! 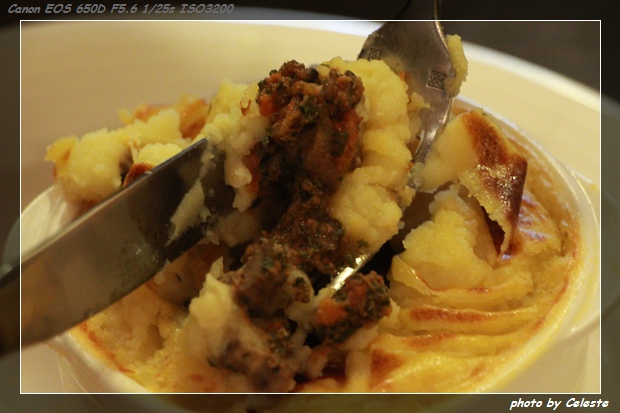 I had a bit of it, and it tasted really nice! Next time I go back to the UK, I'm going to taste the local pot pies to compare them with this! 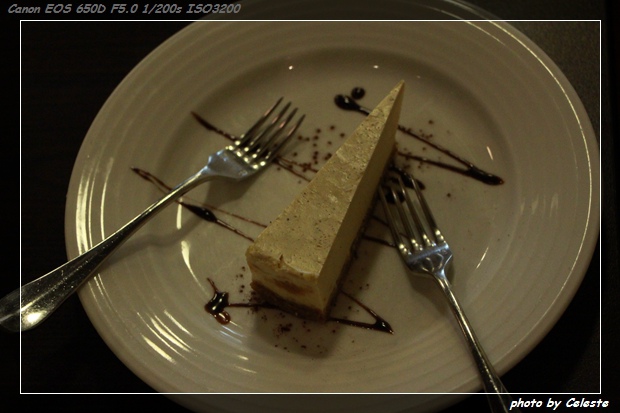 When the dessert was served, they still gave us two sets of utensils. Very nice! 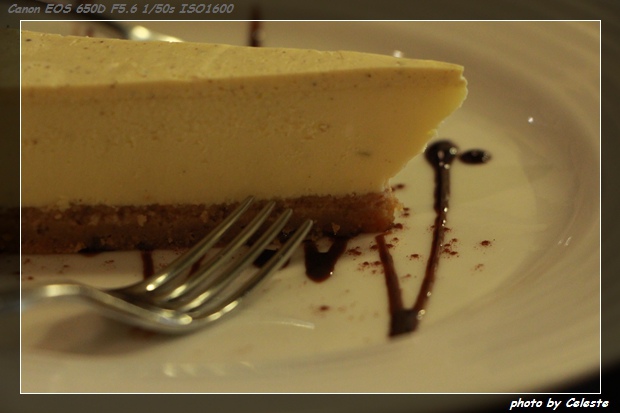 We could not believe how condensed it was! The taste was very rich! And it was not soft and soggy like the cakes you find elsewhere. Simply delicious!! 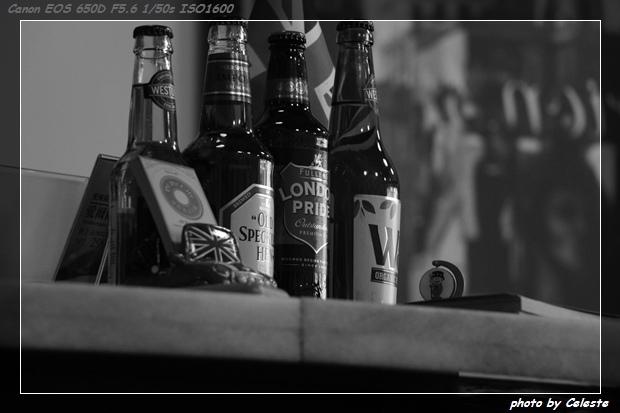 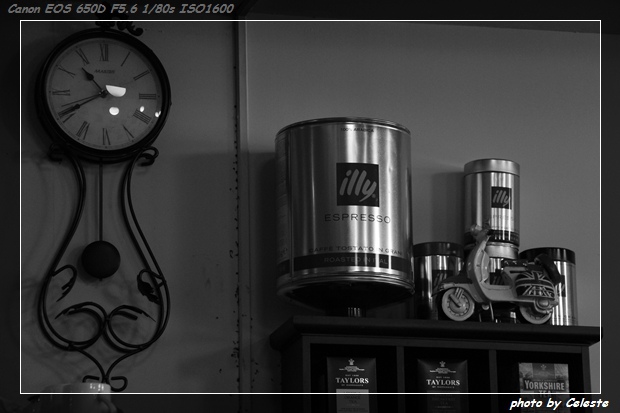 There was a table with two babies while we were there. There was also anther set of customers waiting for their table outside the cafe. But when they went up to pay their bill, they were told not to rush (as it happened to be feeding time for one of the smaller babies). 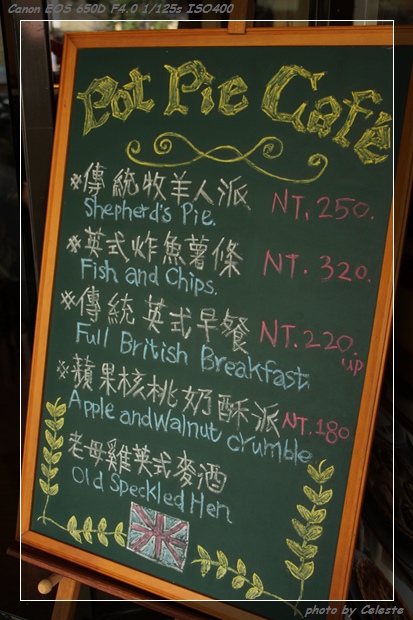 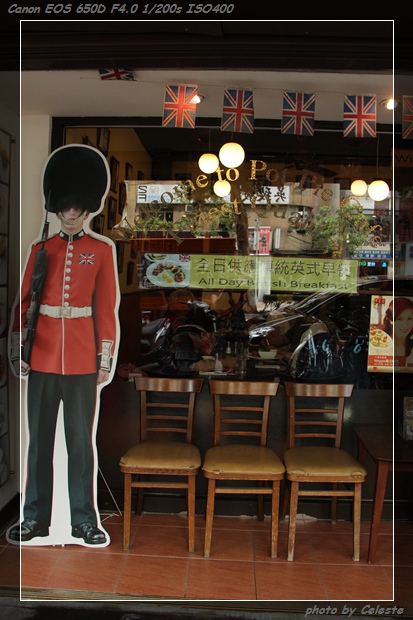 I thing it was not just simply an 'all day English breakfast' I got from this meal! But also a reminder of what it was like to live in the UK. The insistence on completing service for one customer, before serving the next! That's something I really miss about the UK, and something I still cannot get used to since I got back to Taiwan. If the cafe weren't so far away, I'd come here a lot more often!