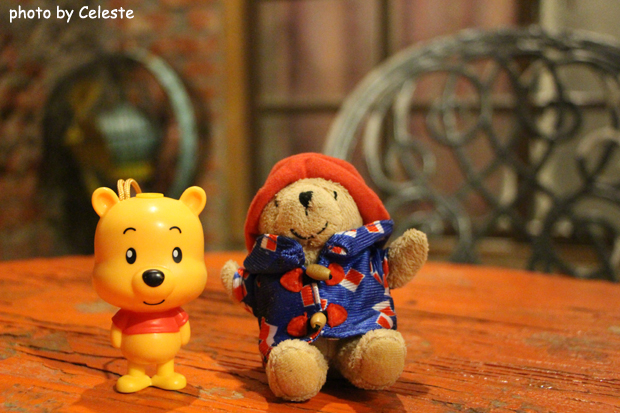 This was a night that belonged to two good friends. 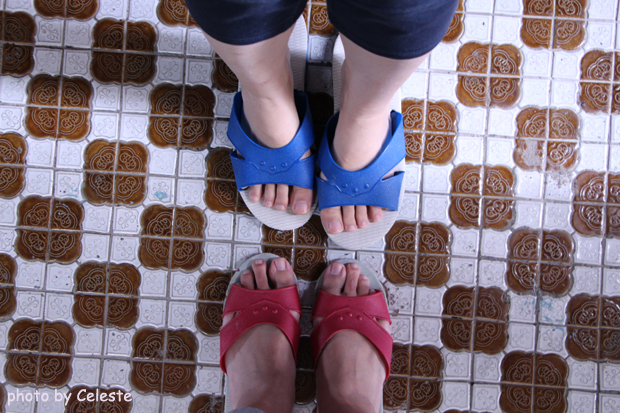 I heard that a good friend is someone with whom you would do lots of crazy things. Well, I don't know about 'crazy', but together, we sure have done many things that others would never come to understand. Do you have any friends like this? Why did I start this article with this? Well, because this old house lodge was the exact reason why I got invited to visit Tainan in the first place. Then what's so special, or so crazy, about this? Answer me this, then: would you spend money to sleep at a lodge that is right in your neighbourhood? I didn't think so. But once you've scrolled to the bottom and seen the entire place, you'll see why I think it was worth the trip from Taipei, just to spend a night here. 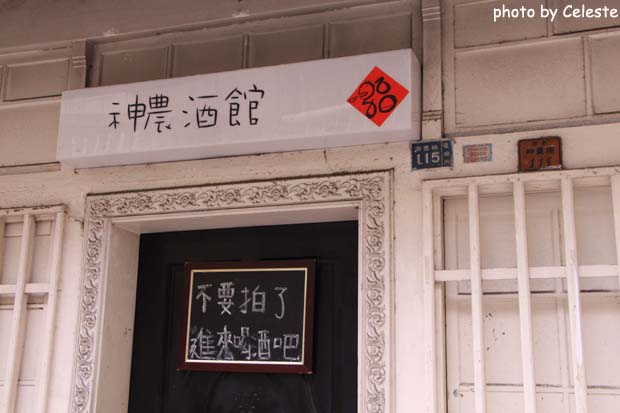 I don't know how many trips I must take to Tainan, in order to see the entire picture of Tainan. There are surprises waiting every time I visit. Every time, the city gives you a different feeling. Other than the fact that good friends are here, another reason for the city's attraction, is that you get a whole new experience of the city every time you visit. 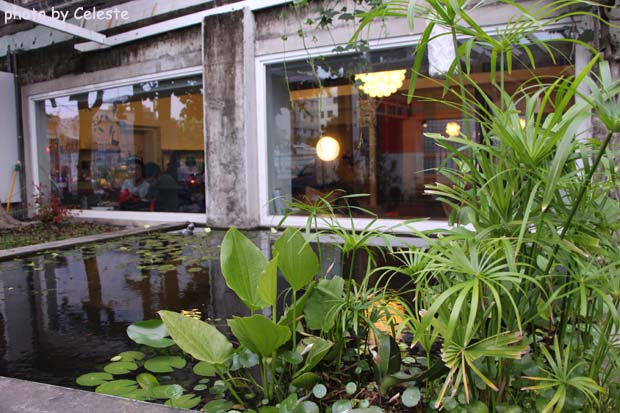 It used to be that my only impressions on Tainan was that it was where one of my uncles lived, and that it was where I could transfer coach to granny's. Later on, as I gained my own Tainan friends, I had the chance to get to know the city, little by little. Everyone would say that Tainan is such a wonderful place. In fact, I don't think anyone would deny that. We've all heard complaints about Taipei and Kaohsiung, but we rarely hear people complain about Tainan. This lovely city surely deserves multiple visits, and each time, make sure that you slow your pace down, in order to really experience the essence of the city.

After consecutive postings of food articles, I think it's time to take a stroll. Or else first time visitors will definitely think I'm an alcoholic (am I not?). Although I still have many food articles on the waiting list, I think I'll take a break from the grease, and use this opportunity to introduce to you another beautiful place in Taiwan (there is a reason why this blog is bilingual!) 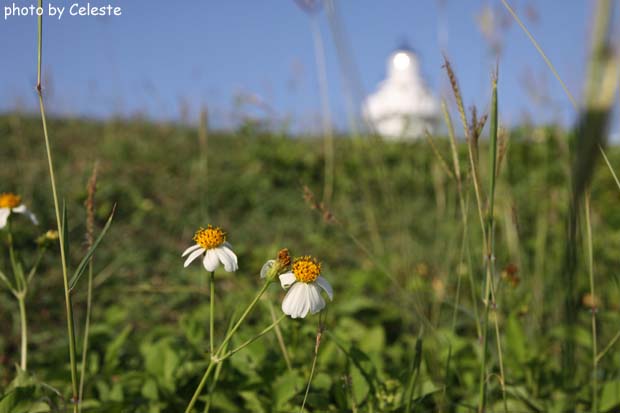 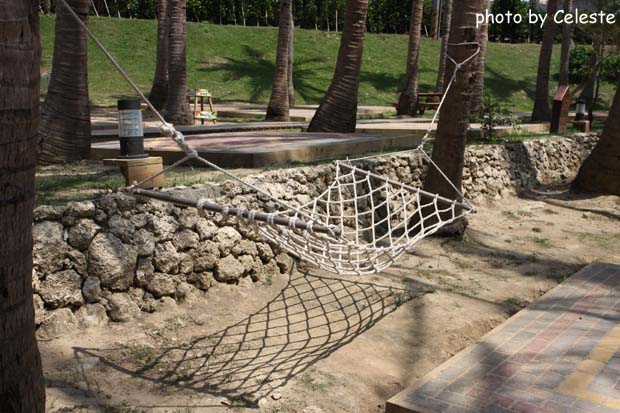 Last year, I planned a trip to Hualien and Kenting to celebrate my birthday. As it was my fist time visiting these two places, I wanted to fully experience the feeling of exploring new places. I looked forward to making new discoveries during the trip. Of course, Hualien did not disappoint me. Kenting didn't either. But on the day of my birthday, I wanted to do something really special. After wandering around for a while, I really discovered a place that made this birthday an unforgettable one! 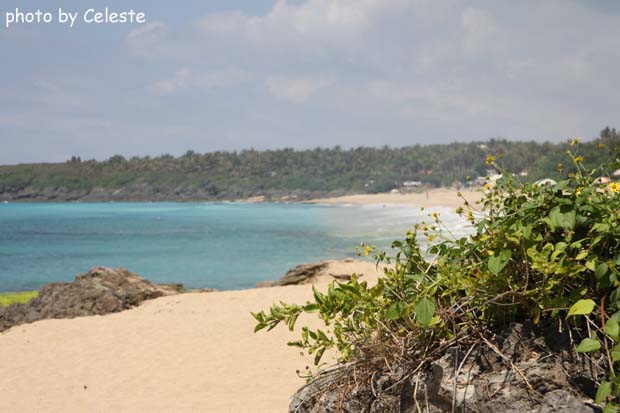 This is a story about a girl and the sea. 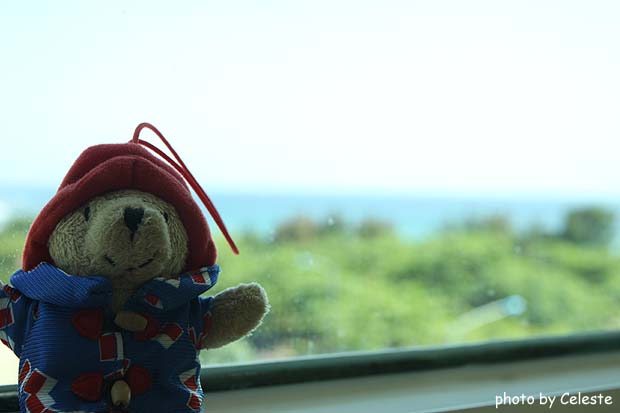 Let's go back in time - to March 2011. I can hardly believe it myself, that it's been almost a year now since this trip took place. This was the second stop of our birthday trip last year - Kenting. Many of you may not believe this, but prior to this, I had not been to Kenting, ever.  I had looked forward to this trip a lot. All I've heard about it, whether from Taiwan friends or friends from other countries, were good things. So let me start this series with the logding. 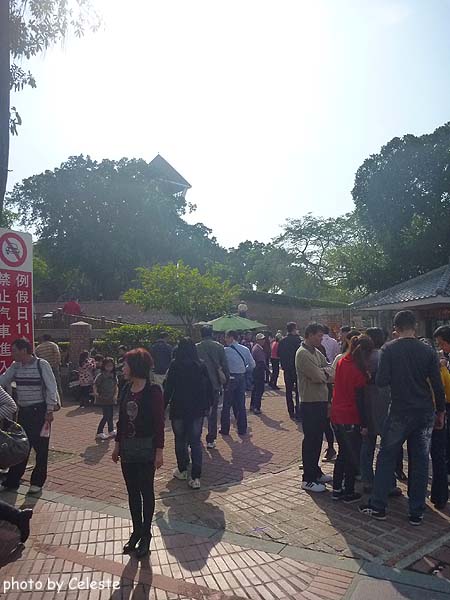 There is a lot to see in the Anping area. There's the Treehouse and the ????. There is also the Fort and 'Old Street'. We didn't exactly have a lot of time at our hands, so we decided to forfeit the chance to visit the Fort, and just stroll along the Old Street. My thought at the time was: I've seen the Fort already, anyway! 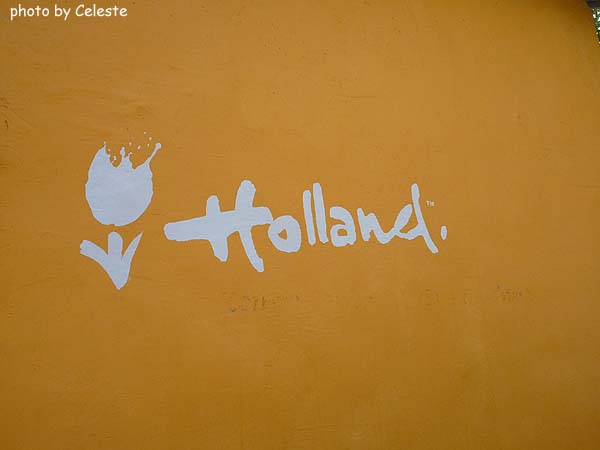 After reading London Paddy's version of the trip, it's time for my version. The first time round, there were very few people, as we came on a non-holiday. This time, with my family, I became the guide, telling them where we could go and what there was to see, etc. At the same time, I fondly remembered the pleasant time I had when I was here for the first time. 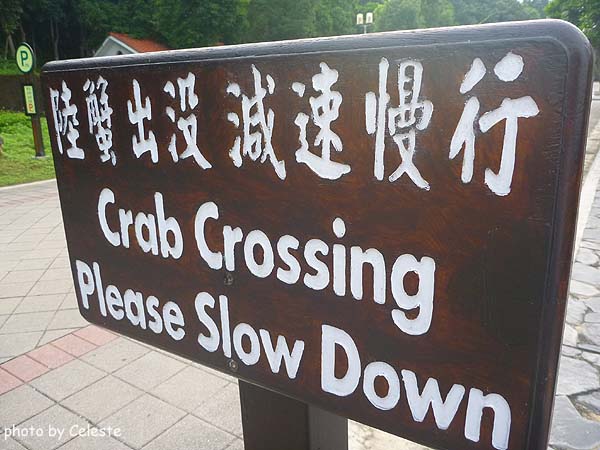 After lunch, it was time to exercise. Because we did not rent a scooter, so our only way around the island was to walk. The map would tell you that there are lots of trails to choose from. But seeing we wanted to catch the last ferry back, we couldn't pick one that was too far away. What we didn't anticipate, was an even more tiresome challange awaiting us at the end of the journey... 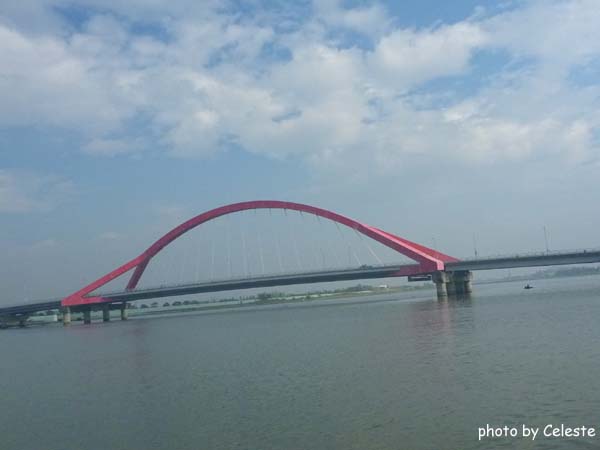 Whoopee! Off to sea! It's been such a long time since I've been on a ferry! The last time was in Liverpool! [See old article] However, that was a river ferry. This time I'm off to sea! This trip was actually recommended by a reader on my Facebook Page. I didn't think that my companion would look so much forward to it when I suggested it to him. The night before the trip, he even suggested that we take the first ferry. What he didn't realise was that the first ferry was at 8am, but it wasn't departing from Kaohsiung! It meant we had to be at Donggang before 8am! 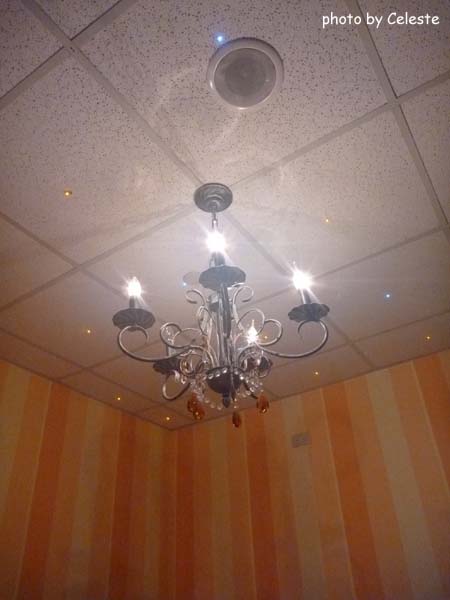 Normally, I wouldn't go to Kaohsiung unless there was a special purpose. The High Speed Rail is too expensive, and any other way of getting there is too time consuming. However, it just so happened that the two weekends I had to go to Kaohsiung were back to back... I was quite pleased with the first place we stayed at. This time, we came to the popular Building 85. It had been a rather interesting experience. 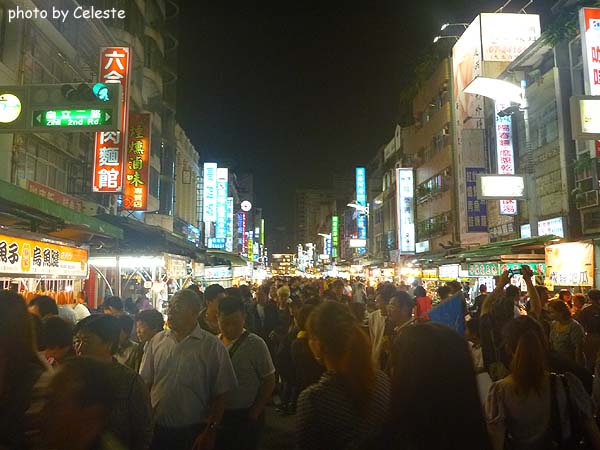 I've heard that Liu-he night market has now become exclusively for tourists. The last time I visited this night market, was when I was still in uni! This time, it was because the hotel I stayed at was very close by, allowing me an excuse to revisit it. However, because this was a business trip, so by the time I got back to the hotel, I was too exhausted to go outside the neighbourhood of where I was staying. The night market was within a walking distance. Although people say that night markets are all similar, however, I find that Kaohsiung night markets varies quite significantly from those in Taipei. For one thing - there are a lot more seafood stalls here!

I stayed here for a business trip down to Kaohsiung. I was really lucky to have found this place. It was within my budget, new and clean, and best of all, the service was excellent!

Initially, I had asked for a single room. However, there weren't any more single rooms left. They asked me if I wanted a double room instead, but I said the double rooms exceed my budget. When they heard this, they told me that they had a smaller double room within my budget, and asked if that was acceptable. I gladly accepted, because of their thoughtfulness. 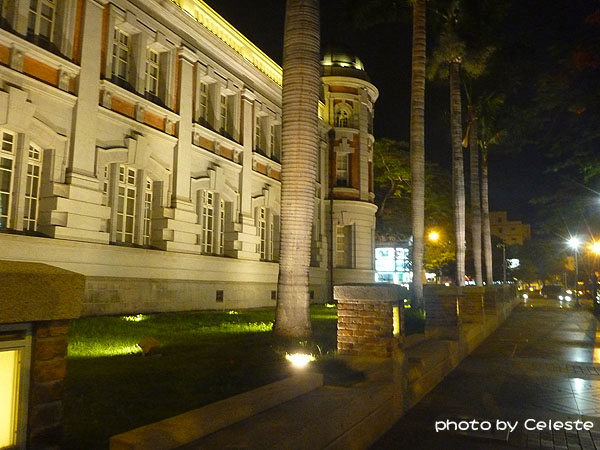 My first visit to the Taiwan Literature Museum was during the day. It was also before I departed for my MA pilgrimage to the UK. The feeling I have towards this place is indescribable. I will just say that it is this place, that enables me to understand how people feel when I speak of English poets and writers that people wouldn't generally know about. Because know less than a handful of Taiwanese writers. 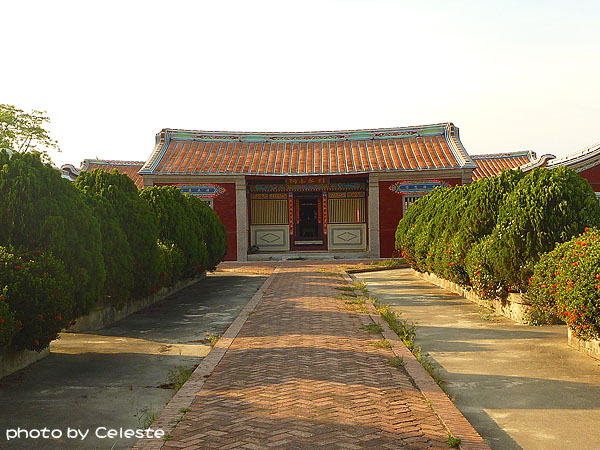 The Liu Family House is a private heritage site that is free to public all year round, admission free. I would have never known about this place if it hadn't been for my very 'professional' local guide. Shameless to say, I don't know much about Taiwan history, but that does not, in anyway, disparage the beauty of this historical building. 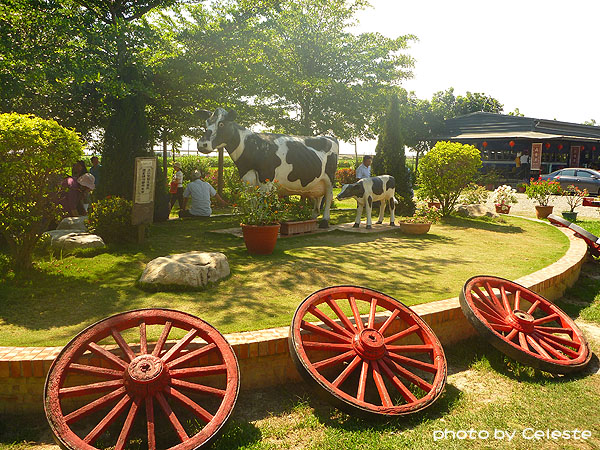 Remember that place I went for a meeting in Changhua? [Read more] Well, I didn't know what to say about that place... and I'm not quite sure I like this place more or less than the other. You'll see what I mean if you read on... 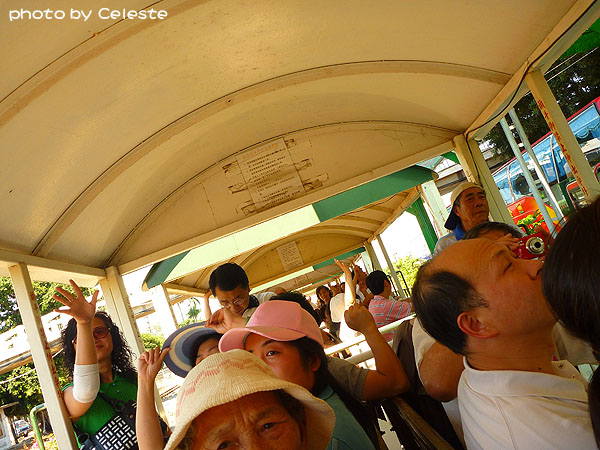 I'm not sure about the exact name for this type of train, perhaps someone could enlighten me, but since it's supposed to be half the size of a full sized train, I will call this 'mini-train' for now. You can catch a ride on one of these at the Sugar Factory in Hsin-Ying. It's NT$100 per ride, return. Do watch out if you happen to be on one on a bright and sunny day, which is more than common in Tainan, cuz you might get roasted. Blazing sun protection is highly recommended. 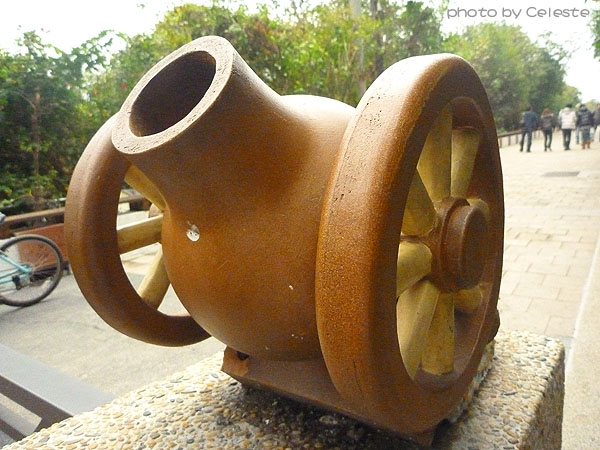 Located on Cihou Mountain in Cijing District of Kaohsiung City, the battery is now rated as a Second Class Historical Site. The weather on this day was not particularly pleasant. There were a few rain drops. I suppose my presence in Kaohsiung in its abnormal weather could make this a special experience, somehow.