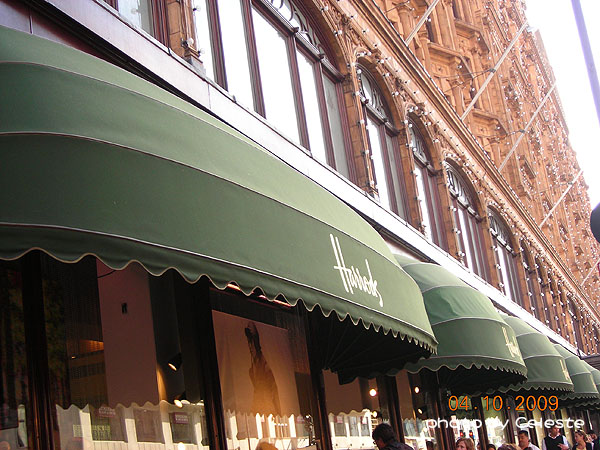 I don't deny that I like to complain. But the fact of the matter is, I really think that if you make yourself do something that is slightly out of your comfort zone, great surprises may await. I'm starting this off with something seemingly so unrelated because this is why I got a chance to visit Harrods. If it hadn't been 'someone', then I really thought about skipping Harrods. What? I'm not a big fan of shopping anyway. And even if I am, most of the things here are way over my budget anyway! BUT!! I'm glad I went anyway! You'll see why.

The British Museum is open until 8pm every day (summer season). However, not all galleries are open after five. This is what I had not known during my visit. Unfortunately, after they were ushering people out of certain galleries, I realised that I had already been to the galleries that were open till late. I had to come back the next day. When I asked the clerk if I needed to pay again for my audio guide, he kindly signed at the back of the reciept, and assured me that I didn't have to pay again the next day. 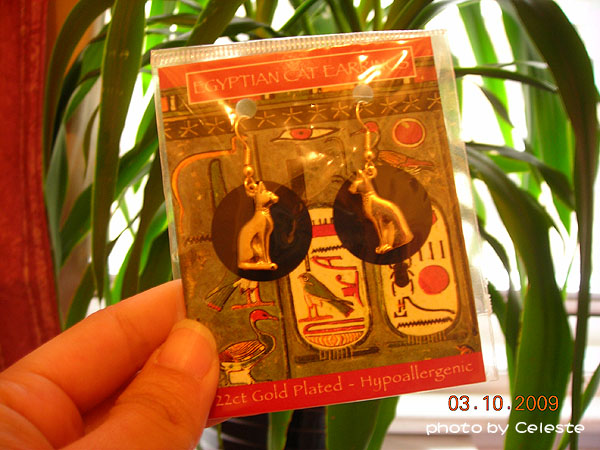 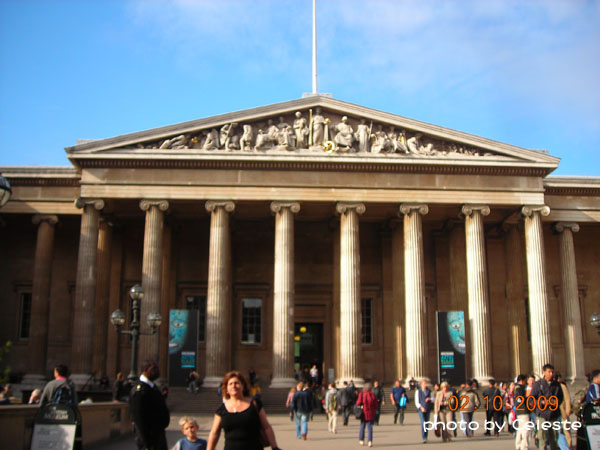 This is yet another place in London that tourists/travellers must visit while in London. When you plan your itinerary, do make sure that you leave at least one full day for this. Because even if you are an amateur, you'll still end up spending an entire day in here! The best news of all is that there is no admission charge, although it is strongly recommended that you rent an audio guide to get the most out of this trip. 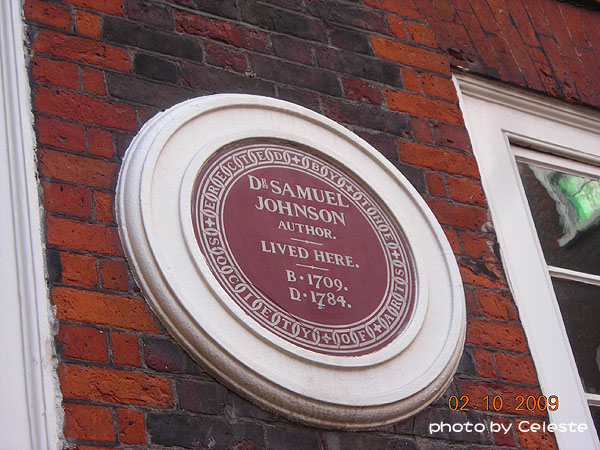 Who is Samuel Johnson? I'll bet not many people know his contribution to the English speaking world. We are looking at the house of the person who put together the VERY FIRST English dictionary! All of you who have ever even touched a dictionary, whether Merriam Webster, Longman, Cambridge, or even the mighty OED, have Johnson to thank for it! 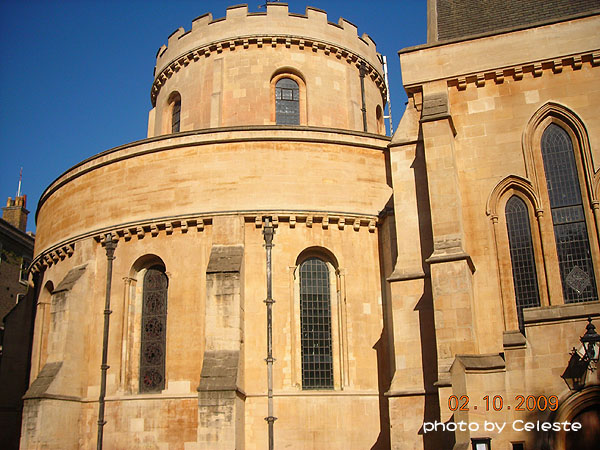 I reckon not a lot of tourists would come here, prior to the time of the 'Da Vinci Code'. This is the place where Langdon brought Teabing, thinking there were tombs of knights here. Only after their arrival did Langdon realise that there were only effigies, not tombs. Then, Teabing's butler came in, shooting, taking Teabing as hostage... 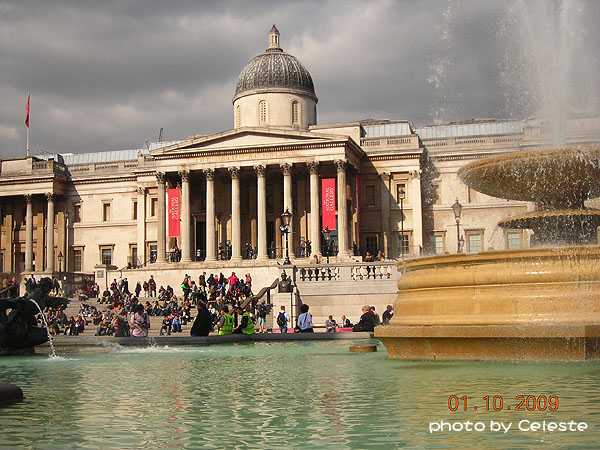 Although my student ID had already expired, and I've already made the best use of it while I could, I still managed to get concession for the audio guide at the National Gallery (chuckle). Actually, I planned to tell the lady that I hadn't been aware of its expiration date, that is, if she found out. Fortunately, she didn't. And I still got the concession. Look at the first photo, doesn't it look like a painting?

London Eye, yet another landmark of London, and made its appearance in so many movies, it should receive its very own Academy Award! 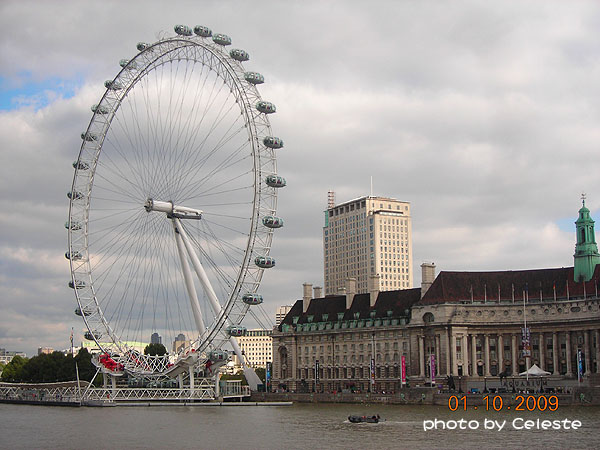 The Mandarin nickname of Big Ben, if translated back to English, means 'Big Clumsy Clock'（大笨鐘）. When I was still teaching English to young scholars, I once had a student named 'Ben', and his fellow classmates often teased him about his name (phonetically sounding similar to 笨 = clumsy) Personally, I think it's a rather cute translation of its nickname, and quite aptly named as well. However, few people know the origin of the 'Ben' part of the name. 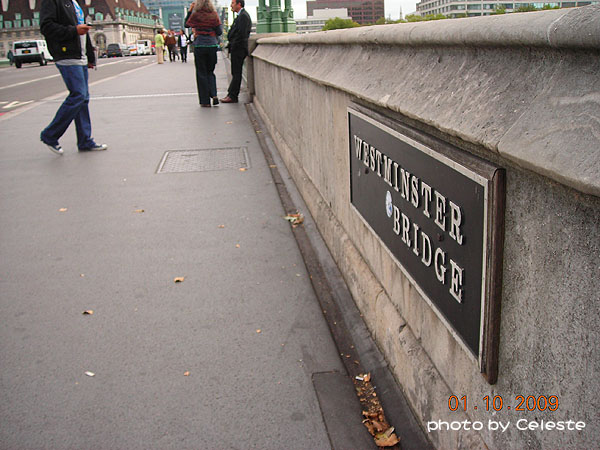 Westminster Bridge was built in 1862. Most people know it from the sonnet 'Composed upon Westminster Bridge, September 3, 1802' by the Romantic Poet Laureate, William Wordsworth. Although the surrounding area now, is not quite as picturesque as the sight Wordsworth had seen during his time, the walk over the bridge, I'm sure, continues to be rather pleasant and enjoyable. 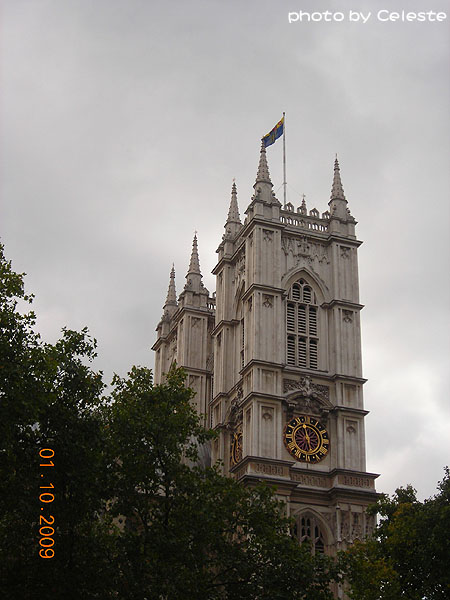 Westminster Abbey. I don't know to emphasise its significance in history, and up until the present day. How many kings and queens had their coronation and burials here. Its Gothic style architecture, along with the nearby landmarks of Big Ben and Houses of Parliament, and the London Eye, together completes the picture of this part of London. 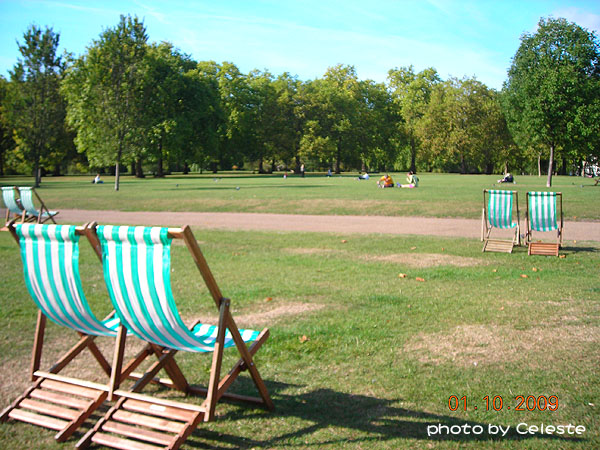 The comfy chairs can be seen all over the parks in London, but do think twice before you sit yourself in one of these - they cost money! Anyhow, if the weather is nice, why would you need those chairs? Enjoy the crispy green grass, and the best thing of all about it is it's free!

As I was remorsing for the lost photos I had taken of the changing of the guards, all of a sudden I saw the following... 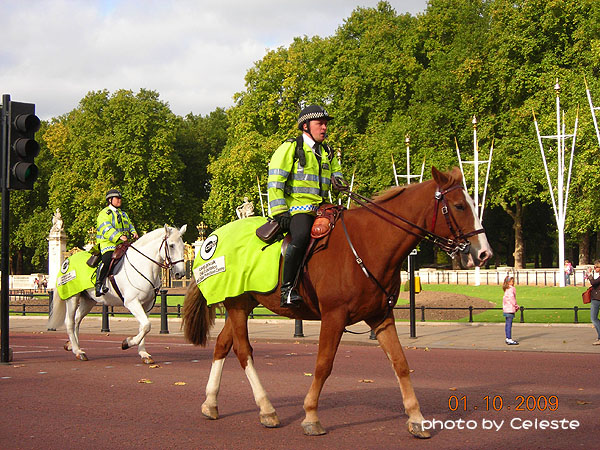 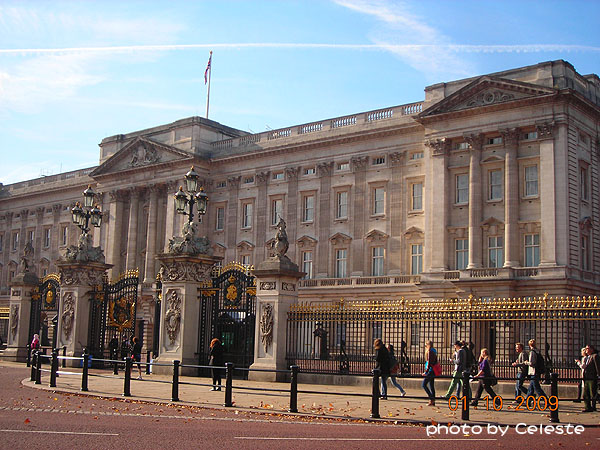 This is Buckingham Palace! Recall what I said before, that I lost all the photos I had taken on my first day? Well, I came here on my first day in London, and caught the changing of the guards. I made sure I did, so that I could have the photos and keep for all eternity. You can imagine how devastated I was when I discovered I had so stupidly deleted all the photos!

Don't leave the museum without taking something with you! Even though the gift shop is rather small, it's still packed with useful (and useless) souvenirs for yourself or for your Holmes fanatic friends. 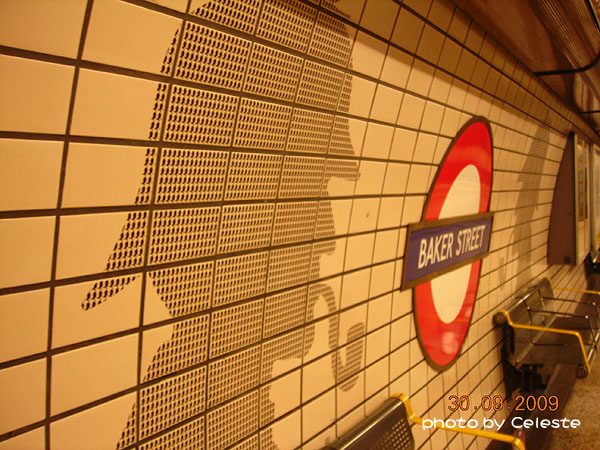 Whether a fan of the entire Sherlock Holmes, or a comic fanatic of the Japanese kid detective Conan, this is yet another place in London not to miss out on. If you don't have the time, it's still worth a Tube trip to see the station itself. 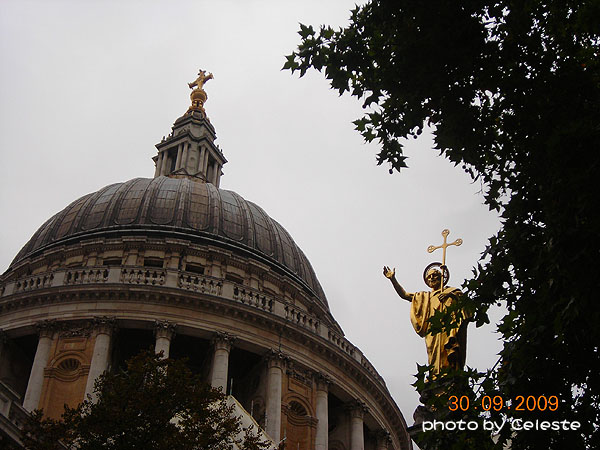 Remember what I said in the article on Bath Abbey Tower Climb? That an even bigger challenge awaited me? This was it! St. Paul's 500+ steps to the top of the tower! 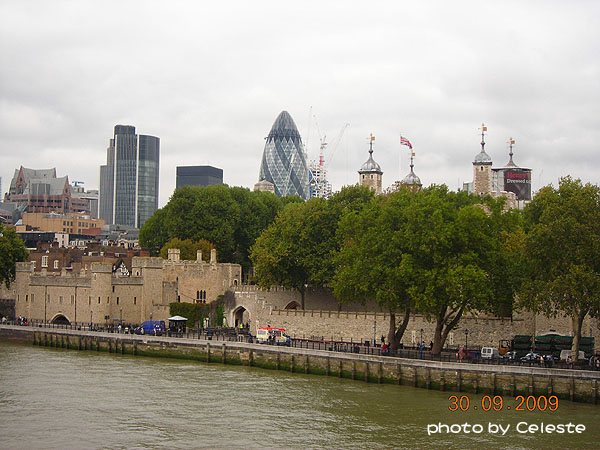 If you walk along the Themes, and reach Tower Bridge, it'd be impossible to miss Tower of London. This historical site is such an impressive building because of all the famous lives involved. Even though this time round, I only walked around it, it was still quite intimidating to think of how these important historic people were used to be imprisoned, or even executed here!

I stayed in London for an entire week before heading back home in Taiwan. It was my final destination, and sort of marked the grand finale of my entire year in the UK. You know what they say about London and typical English weather.... However, during the seven days I was there, I did not see a single drop of rain. It's supposed to be a good thing, nonetheless, it didn't feel quite 'London-like'. Yes, there were gray days like this, but no rain at all. It made traveling much easier.

This article shows you two boats that were docked by the Thames. Just by looking at these two different boats, you'll get the feeling that the whole of England can be summed up by them - a place where the new intertwines with the new. 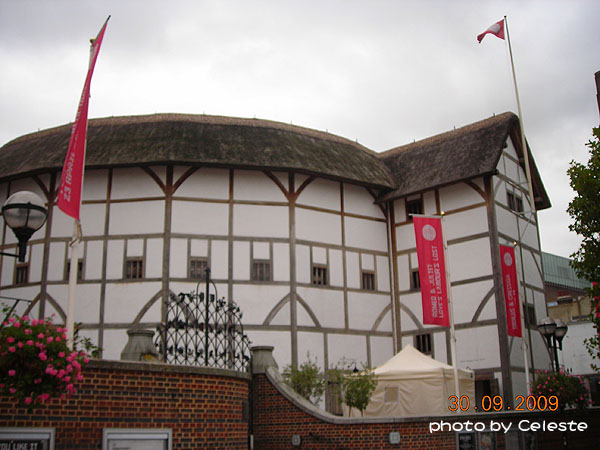 If you are a Shakespeare fanatic, this is another 'sacred' place you simply just can't miss out on. THE GLOBE. Even though it is not the original, it's as close a replica as it gets. The original was destroyed in a fire in 1613. Just by looking at the materials from which the theatre is build, it's not hard to imagine how fast the building would have burnt down. This reconstruction, though not located in the exact location as the original, is just a few hundred metres away from the original site. It was opened in 1997, with a production of Henry V. 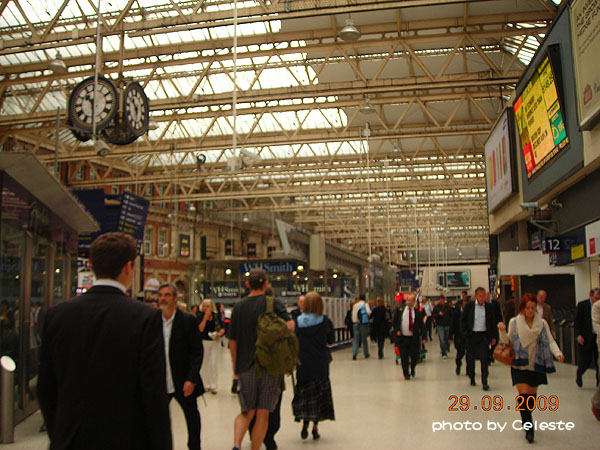 This is what a London train station looks like. I can't remember where the one above was taken. Possibly either Victoria or Waterloo...